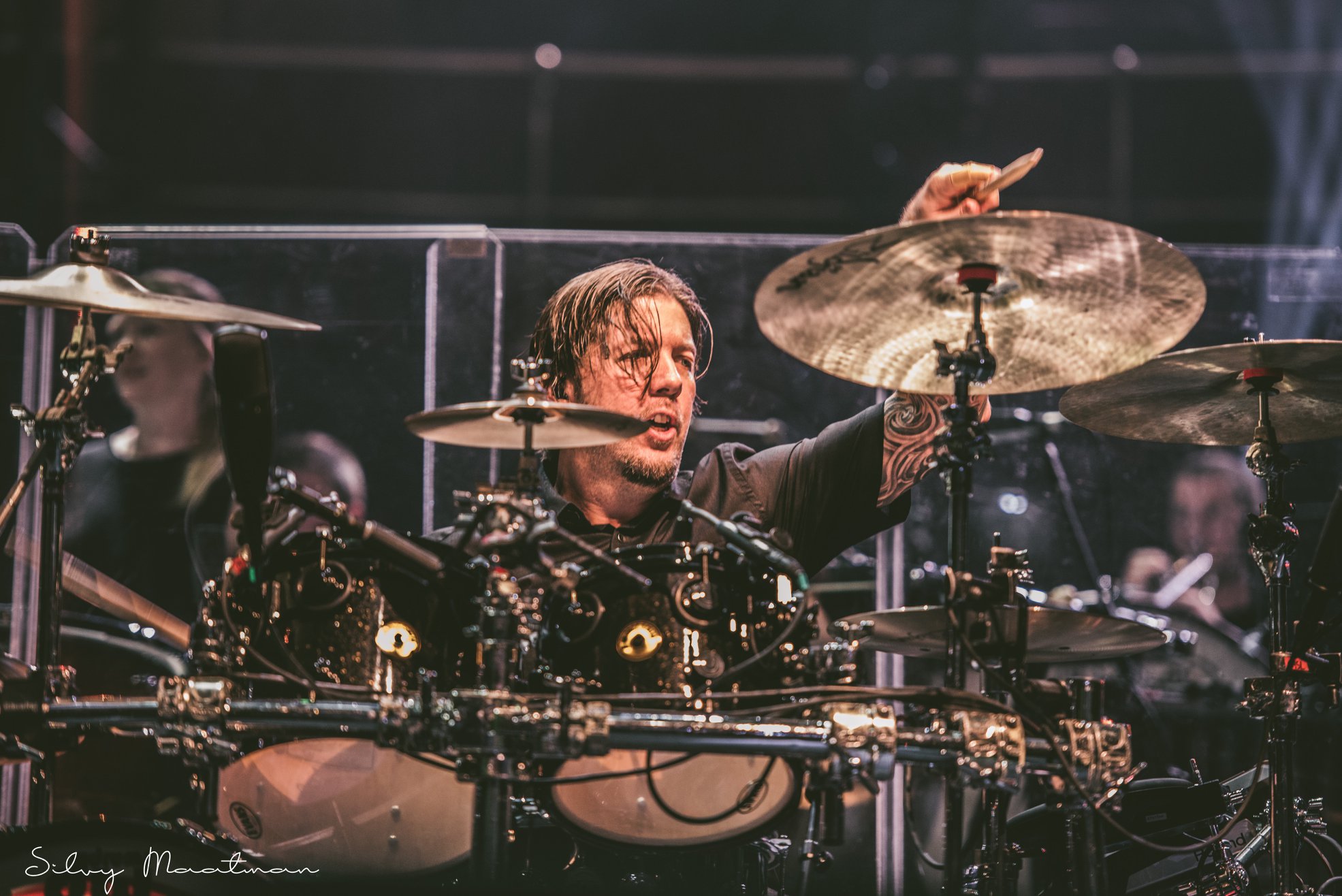 Q: Hi Scott, thank you very much for taking your time for this interview at the occasion of the release of the new live album Live At The Royal Albert Hall featuring the Parallax Orchestra which is coming out this Friday. This is the second live album in a row, you released Live At The O2 last year in September where you recorded your concert in the famous O2 Arena in London. So why did you decide for such an untraditional way, to release two live albums in such a short time?

A; That's a good question. With the O2, we didn't shoot video for that particular show. I feel like until this point we've always done a lot of CDs, there's always been a lot of concert footage to go with the live CD. And we wanted to capture that O2 arena show, the biggest one of our career as a headliner at that point. But we didn't wanna fully commit to DVD. Knowing that maybe something would come up in the future that would be a better fit. We've done live DVDs before and just felt like getting that show captured to audio and letting the fans have something from that night. We recorded something on the Fortress tour, but had issues with getting that released, and issues with the audio from that night as well. And there's been the Live at Wembley DVD also, that came out in 2012. It has been many years since that. And then from that night once we started to put together the possibility of doing a live show with an orchestra we knew that was something we had to capture. If for nothing else, just for us, to save that we did it, and to have something to look back on later in our lives. We knew that was gonna be two special nights. But you know the fans would certainly enjoy that as it’s not a normal live show for us. We had to capture that both audio and video.

Q: As mentioned, you had some troubles in the past with the live recordings, so how did you choose people to work with this time?

A: Our manager Tim Tournier had a relationship with Dan Sturge. He knew that he's a good director and videographer, editor, he did it all well. And as far as the audio recording, we used Brian Sperber, he's been friend of ours for many many years. He mixed the Blackbird album, did mixing on Live in Amsterdam, also did Wembley. And the one show that we recorded that we never had the chance to release we didn't use him at that point in time. We had a couple failures that night and we realized pretty quickly that it was a great show, great audience, but we weren't going to be able to put out a quality product.

Q: The whole concept was Tim's idea. What did you think when he first presented this to you, doing the show with an orchestra? How did the cooperation with this big orchestra started and looked like?

A: Well with Tim presenting the idea to us, we were all terrified probably for the first five seconds and then just realized what a great of an idea it was. What an experience that would be. Not only just the part with the orchestra but also the Royal Albert Hall. And not only get to do it for one night, but get to do it for a couple.

A: We got kind of strong fanbase in UK. For any fans in the Europe and people flying in from US it's kind of located sensibly, it's really easy to get to compared to other places we could have chosen. We did multiple nights knowing that we would have people travelling from all over the world. The fans we met throughout the years that travel from show to show to show, it used to be something special for them. And the Royal Albert Hall fits little over five thousand people. London being one of our strongest bases, the last time we played the O2 I think we had about 13000 people there. We just knew that we wanted to do multiple nights to get a chance for more than one crowd to get a chance to see that show. And having a 52 piece orchestra behind you it's certainly a lot of chance for things to possibly go wrong. But thankfully they didn't. Knowing we were going to record that we wanted to have a couple of nights to choose from.

Q: Before the show you also had some rehearsals. It was just for two days and that is really a short time. It is one thing to have orchestra rehearsing on their own and you guys rehearsing alone, another to do it together. So what was it when you came together for the first time?

A: It was awesome. Definitely nerve wrecking. I think for a show like that to have a week worth of rehearsals would have been great. But knowing that we had two days we had to make the most of it. The show was about two - two and half hours long and I think we all thought we would just run through it multiple times on each day. But from start to finish I think we only got to go through the entire show once. There were parts that needed to be worked on. Our timing was messing with the orchestra timing. To get all the in ear mixes and the monitors and all that kind of stuff. When you are mixing for four guys and then for fifty something people it'd be a lot more daunting. So two days of rehearsals isn't enough. If we were to do it again we would certainly want to schedule a little bit more time.

A: I would like to repeat something like this. That would be something really cool, maybe at different venue, we would certainly change the setlist, you know, different settings. I would love to go back and play that room again, to do it with the orchestra. But we've done that so let's find another way to incorporate the orchestra to a live performance.

Q: The Parallax Orchestra kind of seemed like the perfect fit for you guys. It's not your typical orchestra. They are pretty young and Simon Dobson looks like a total rockstar, he just fit right in. Would you like to do something with those people again? Simon was already featured on Myles' solo record. Any plans to do something together with Alter Bridge maybe?

A: It's certainly a possibility. We all hit it off real well and Simon is such a great guy, he's so talented. Will Harvey as well. Both of those guys, the whole orchestra has that sort of rock and roll feel to them. We would certainly love to have a chance to either record with them live or to have them featured with Alter Bridge again.

Q: How did you go about choosing the actual setlist? You even played a song you never played before, Words Darker Than Their Wings.

A: If we were gonna do something with the orchestra we needed to have a different setlist. Not quite the same songs, because Come To Live, Isolation, stuff like that - they're great songs live but to have an orchestra behind us we had a chance to feature them on songs like that. We wanted to have a setlist that made sense and the orchestra to be featured as much as we wanted to.

Q: The recording is combination of both nights, even though it hardly shows on the final video at all. How did you decide which song from what night to include in the final piece?

A: Oh I think most of the show was from the second night. There were a few songs from the first. It kind of depended on the just the general feel of the song. The set was incredible both nights. The second night we were all a little bit looser after already having it done once because of knowing what to expect and letting our guard down a little bit. We listened to both nights and went through each individual song and the crowd reactions and all that. There was something kinda special about the second night where it all sounded just like we weren't as guarded and we weren't as worried about how it will turn out, what the outcome is gonna be, we fully emerged ourselves in the songs.

Q: How did you personally enjoy the show? What was it like to play with such a huge orchestra behind you and then return to the regular shows with just the four of you?

A: It was absolutely incredible during the evening, both nights. And having an orchestra behind you just feeling the power come of the stage from what those guys produce, the crowd reaction all I can say it was completely magical night I'll never forget. And then we travelled within that entire tour through Europe which was amazing but you know the next show that we did we could really feel like oh man, with the orchestra not here, it's just the four of us now. Yeah, it was tough, not having them accompany us to the rest of that tour but we still had a great time and still incorporated some of those songs into those performances. Some of those songs we haven't played in a very very long time. It was fun, it was nice.

Q: On the webpage there were many bundles with the new album and they all sold out before the release date. Did you expect such a response, how do you feel about it?

A: We're super excited. We know that we were confident that we've got a really good product when it went live in July. And again, it's unlike anything we've ever done before. To get it sold out it certainly makes us happy and it was a real testament through our fans and fanbase. We´ve got some of the best fans in the world, they're die hard and a lot of people that were at the show that night were probably some of the first ones to pre-order. Just knowing that told us they are elated they get a chance to relive it just like we do. We're certainly happy it did so well and hope everybody enjoys it.

Q: What are your next plans with Alter Bridge? Word is you will be releasing album next year. Have you already talk about it or started working on something, shared some ideas or not yet?

A: Yes, we will be releasing album next year. We will probably get together within the first couple of months to start the writing process. I know that Mark and Myles are already writing now, it's just a matter of sitting down together with the band. They always do this, constantly writing. But they'll get some ideas together and sit down with the band and start to go through to try and get them pieced together. We're hoping to start recording probably sometime in March or April. We'd like to have the album out sometime in the fall.